So you recently moved into a new home and you noticed it has a satellite TV system. The problem is you prefer to use an aerial to pick up local terrestrial broadcasts (Freeview, etc) instead of the satellite channels that are unreliable.

Is there a way that you can modify the current system? Instead of replacing the cables that probably route through your home, can you use a satellite cable for TV aerial? Or can you use a satellite dish to pick up those channels? I was wondering the same, so I decided to do some digging and tests, what I found might surprise you.

Can You Use Satellite Cable for TV Aerial?

Yes. Satellite TV and aerials use the same coaxial cable. You can use a satellite cable with a TV aerial but you may need to change the connector to an F-Type that’s compatible with TVs, top boxes, and other devices.

Even if the original satellite cable is old, it can still carry HD signals. If you have the option, I recommend replacing the coaxial cables with WF-100 coaxial cables because those are more durable and less prone to interference. For more information, take a look at our list of best coaxial cables. +

In most cases, converting a satellite cable to be used on a TV aerial is not as difficult as it sounds. The good news is satellite TV and aerials both use coaxial cables, which can also be used for cable TV subscriptions, internet, and other services, it’s a highly versatile cable. Before you tinker with any wires, make sure to double-check your setup to clarify what you need.

The main issue you’ll have is changing the connectors, from satellite to the connectors on either your TV or top-box. In most cases, if your TV has a Freeview tuner, it will probably have an F-connector port. If it doesn’t, you might need to buy a cheap Freeview box that has one. There are also some cases where your satellite cable already uses F-connectors.

In that case, unscrew the end that attaches to the satellite and re-attach it to your aerial. You can even place the aerial near the satellite or clipped on onto it. The other end of the cable would connect to your TV or top-box.

The end that connects to your TV will probably already have an F-connector fitted. But if your satellite connection uses a different coaxial connector, you will need to refit the cable with an F-connector which we’ll talk about in a moment.

Fitting an F-Connector to a Coaxial Cable:

Even if your satellite cable has an F-connector, you might want to replace it because they can lose quality over time. Fitting an F-connector to a coaxial cable is relatively simple and you can use tools to make it even easier.

How to fit an F-connector to a coaxial cable:

You can do most of this with a precision knife, but you could use a tool such as this Preciva Coax cable crimper to guarantee exact measurements and cuts. Of course, if you want to avoid all that, you could hire a technician.

Here’s a video I found on YouTube that shows this installation in detail:

Use a Satellite Cable to TV Aerial Adaptor

For a seamless connection, a connector and adapter set available on Amazon is all you need. It comes with an F-Connector for the satellite cable to connect to your female coaxial socket; it also includes one Female Coaxial Cable Connector so that you can convert any male aerial adaptors into a female–perfect for when using TV aerials or other outdoor antennas! The output of hifi signal shows no loss in quality through even HD signals. All these converter / adapters come complete with two pieces each: 2 x TV Aerial Connections (F -connector), 1x antenna Adapter(female) 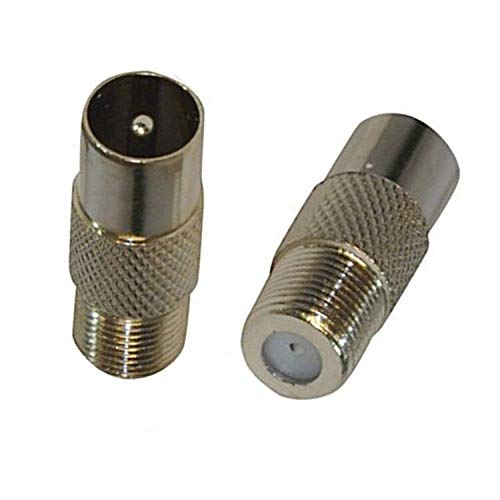 Can I Connect a Satellite Dish Cable Directly to TV?

In most cases, you can connect a satellite dish cable directly to your TV but you will need a TV with a satellite tuner to receive free satellite TV channels. Without a tuner, the best option would be to use a top-box such as Sky Box or another that has a satellite tuner or receiver.

If you have compatible equipment, you should be able to receive free satellite channels such as; Channel 4, BBC One, BBC News, ITV, Five, and many others. In some cases, using an already setup satellite dish for free satellite TV might be cheaper than buying the extra equipment needed to use an aerial.

There’s a lot of debate regarding satellite TV vs cable TV. The main takeaway is both options are viable but satellite TV requires an unobstructed view of the sky and is more prone to interference such as weather and whatnot.

Aerials for local terrestrial TV are also a lot easier and cheaper to set up and you don’t need to subscribe to any specific satellite service.

Can You Use a Satellite Dish to Watch Freeview?

No. Satellite dishes can’t be used to watch Freeview because Freeview is broadcasted on a local terrestrial frequency and you need a specific aerial to receive those signals.

However, you can receive TV services such as Freesat, FTA, and others, from a satellite, but it’s not as reliable as Freeview. Satellite TV does have some advantages though, such as more channels, but your dish needs to be properly aligned and weather conditions can interrupt the signals.

Freeview vs Freesat What’s the Difference?

The main difference between Freeview and Freesat is each requires specific equipment and delivery methods. Freeview is broadcasted locally and accessed via an aerial. Freeview can be accessed by about 98% of the U.K.

Freesat, on the other hand, is accessed by a satellite dish aligned to satellites. It requires a more permanent setup but the coverage is 100% because the frequency is broadcasted from satellites. Each option has its pros and cons, what it boils down to is which one is convenient for you.

If you’re out of Freeview range, and you have a satellite dish, Freesat could be an option. Likewise, if you don’t have a dish, Freeview is your best option. Another point is Freeview can be accessed from portable aerials which can be easily brought in cars, mobile homes, or even camping trips. Freesat requires a dedicated satellite dish.

Can I Have Freesat and Freeview at the Same Time?

Yes. You can use Freesat and Freeview at the same time but you will either need two set-top boxes, one for each service, or one box that is compatible with both services. Each service requires a dedicated coaxial cable.

While it can be hard to set up, it’s possible to use both at the same time, and you can even record programmes from each, depending on your configuration. The easier solution would be to use two boxes, one for each service. Bear in mind, that means you need a TV with multiple HDMI ports, and there’s a lot of extra wires.

To summarize, there are lots of options for free TV in the UK, and with some modifications, you can easily upgrade old setups. Most TV services use coaxial cables, so it really boils down to adding the right connector to the coaxial cable to make it compatible with the service you require.

1 thought on “Can You Use Satellite Cable for TV Aerial?”