Not every Xbox model has an optical audio port. Consult our list below to find out which Xbox supports it.

Does Xbox Have Optical Audio Out?

For those of you who are holding on to Xbox One, take a look at our list of best optical audio cables for Xbox One.

Why Use Optical Audio Out?

Microsoft chose to remove optical audio out support on the latest Xbox generation due to a lack of user interest.

In other words, people weren’t using the Toslink audio, preferring to use the HDMI audio instead. Granted, HDMI audio is technically superior, but Toslink is compatible with older external speakers.

For example, if you want to connect your Xbox to a soundbar or a home theatre, you could use optical audio. There are quite a few people such as yourself with 5.1 or 7.1 audio channel receivers.

The Toslink cables are also much thinner and more flexible than HDMI cables.

How to Connect Xbox Series X to Home Theatre

Well, there are a few workarounds that I’ll share with you.

Does your receiver support eARC? eARC delivers the best audio experience, and it can carry all the audio formats.

What you want to do is connect your Xbox Series X to your TV with HDMI. Next, locate the eARC HDMI port on your TV and run an HDMI cable from that port to the same port on your receiver.

Most of the time, the TV will automatically detect the receiver and send the audio to it. However, you might need to manually change the audio output settings on your TV to HDMI eARC instead of the TV speakers.

Most modern receivers will support audio over HDMI.

But if you have an older receiver, and it does not have eARC, move to the next section.

Use Your TV’s Optical Audio Port

Most TVs have an optical audio port. What you can do is connect your Xbox Series X to your TV via HDMI and then connect your TV to your AV receiver via an optical cable.

Just bear in mind that Toslink does not support certain audio formats like Dolby Atmos.

There are plenty of HDMI audio extractors that can extract the audio from HDMI and convert it to the port you need. These are especially useful for consoles because consoles only have a single HDMI port.

However, I only suggest buying an HDMI audio extractor if both your console and TV are not compatible with your receiver. In most cases, your TV and receiver will support optical audio.

To use these audio extractors, connect your Xbox to the HDMI in port and then connect another cable from the HDMI out to your TV. The video signal will be sent to your TV, while the audio will be routed through Toslink or whichever option you choose. Pretty convenient.

To summarize, every Xbox generation besides the latest Xbox Series X and S support optical audio output. However, there are easy workarounds to achieve the same result without an optical cable.

The easiest option would be to route your Xbox’s audio to your TV’s optical audio out and then connect that to a receiver. Another option is to buy an HDMI audio extractor.

Either way, it’s possible to connect an Xbox that does not have optical audio out to a home theatre system. Don’t give up! 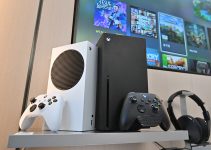