So you’re looking to buy a projector that you can use with your phone without complicated steps or expensive dongles. As it turns out, most projectors will work with a phone but some are specifically designed to make the process easier.

Connecting a smartphone to a projector is usually a lot more convenient than running an HDMI cable from a laptop or TV to the projector. Not to mention features like casting to the projector from your phone make presentations and sharing media a lot easier for everyone, with the added benefit of no cables. The good news is there are plenty of affordable projectors with good smartphone features, so you don’t need to drop thousands of dollars. 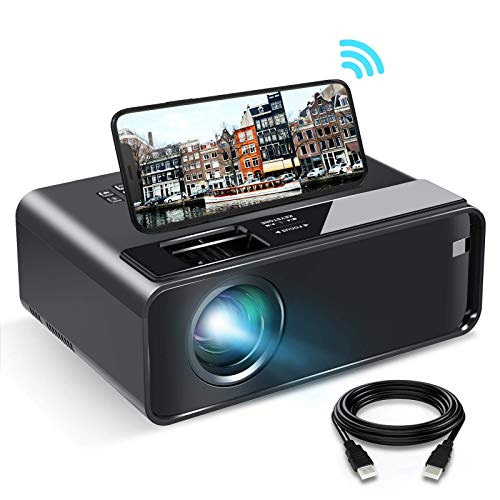 The Elephas W13 is the best budget projector for those looking to cut costs while still getting a high-quality image. The 120″ maximum display size makes it perfect for use in small spaces, or even just hanging on your living room wall! It’s hard not to be impressed by this machine when you notice its low price tag – but don’t let that fool you into thinking it won’t work well with higher quality content like movies from paid streaming services such as Netflix or Disney+.

The fan noise is noticeable on the left side of the projector, but it’s not too bad. I find 80% volume to be a good spot for watching movies in my studio-covering up any sound from the fans and with no distortion whatsoever. 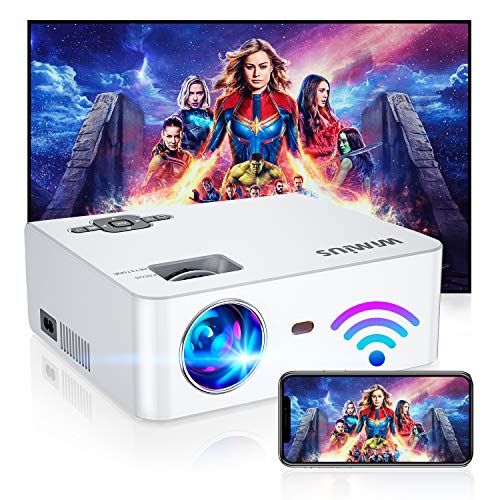 Are you looking for a very budget-friendly projector for a small dark room? While the WiMiUS is an extreme budget option, it’s still a good quality product. I recommend this projector for people that don’t need super HD or special features on their projector.

Surprisingly, the projector does include Wifi (standard 2.4 GHz) and it also supports screen mirroring which makes it very easy to connect your mobile devices.

It also has built-in speakers, 1 HDMI port, 2 USB ports, VGA, and audio ports. The downsides are the resolution is only 720P and the brightness and colours aren’t very vivid, but that’s to be expected from a budget projector.

I wouldn’t recommend this as a main living-room projector. However, it’s great for presentations or watching movies in a dark room, connected to an external speaker for better audio quality. You could also use it for playing games from your phone or console in a dark room. 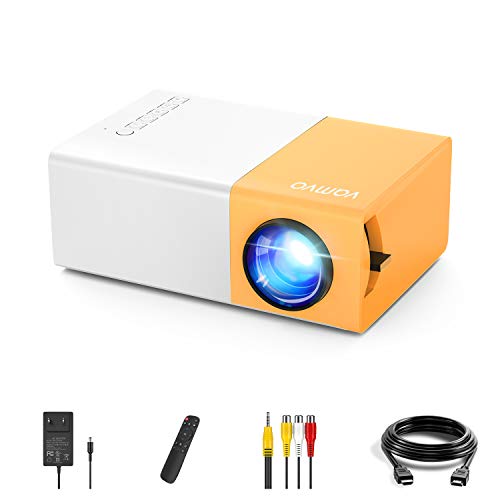 My old Phillips PicoPix projector was a great starting point, but its performance left something to be desired. I had been looking for an upgrade in the form of an excellent portable projector that would hold up well under tough circumstances and provide me with high-quality images using smartphone apps such as Netflix or Disney+. The YG300 has surpassed all expectations by not only providing crisp pictures during the night hours when it’s darkest out but also being able to withstand any weather condition without having water seep into it like other projectors usually do!

I have an iPhone, so connecting this was a breeze using my lightning cable adapter/cable! A power bank can also provide energy for this particular model which makes it easy when you want some privacy out on nature walks or in any other remote location.

I have a projector tripod that I’ve been using with my old projector. The downside of the YG300 is that it’s not mountable on a tripod but can easily sit on top of your table or floor. 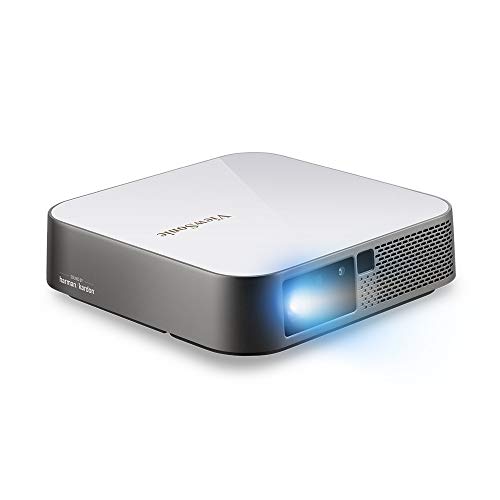 Looking to splurge a little? The ViewSonic M2E is a really cool projector. It’s a higher-end model but it includes lots of awesome features. Weighing only 1 Kg, it’s one of the most portable projectors on our list.

There are lots of features to talk about but I’ll focus on the most important ones. First, it has almost every connectivity option that you can think about. It has HDMI, USB, USB-C, Micro SD, Internal Storage, WiFi, and Bluetooth 4.2. USB-C can be used to connect your phones and you can use it to power the projector too.

The most notable feature is the M2E runs a version of Android that allows you to install apps directly on the projector, and it has about 10 GB of free storage. The app centre is called Aptoide TV, not every app is optimized, but Netflix works great. Besides that, it also has screen mirroring services, as well as Bluetooth for wireless headphones or soundbars.

My opinion of this projector is it’s very futuristic. It’s about the same size and weight as a textbook and it can connect to all your devices and be used for all kinds of activities. I admit I was thoroughly impressed with the M2E portable projector. 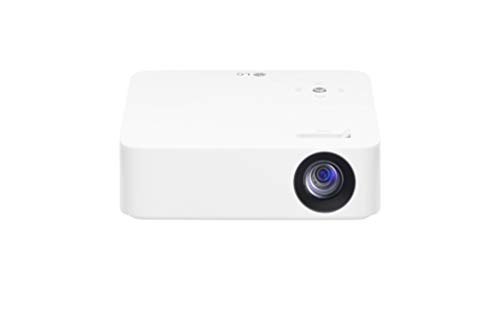 At first glance, the LG Electronics CineBeam PH30N looks like a regular projector but it’s actually very small, the smallest projector on our list. Due to its size, it doesn’t have any fancy performance features, and the brightness is quite low at only 250 Lumens, but it’s suitable for watching movies in a dark room.

But there are some cool features worth talking about. What I liked the most is the PH30N has a built-in battery that lasts for about 4 hours, more than enough to watch a couple of movies. So you can pop this projector in a handbag and start projecting in seconds, it’s about the same size as a small book.

It also has wireless connectivity options, screen mirroring is supported, and you can also use Bluetooth. The PH30N has a built-in speaker but the quality is not the best, so I suggest connecting an external speaker with the 3.5mm port. I think the best thing about this projector is it’s so portable. You just need to turn it on and connect a device and you’re good to go.

How to Connect a Smartphone to a Projector

If you want to show a video on your projector from an Android device, but don’t have the right wireless connection or if there is no Wi-Fi coverage in your area at all then it may be best for you to hardwire into the phone. The next two most common connections that are compatible with smartphones and projectors include MHL and HDMI cables which can connect via micro USB, type C input port as well as some other ports like miniUSB.

Many of today’s newer phones support either one of these types of connectors so it shouldn’t be too difficult when connecting their smartphone up using those methods!

I usually recommend attaching a casting stick to your projector because it makes casting media from your phone to the projector a lot easier and you can also watch Netflix without copyright blocks. The cheapest casting stick is Roku but Chromecasts and Fire TV work well too.

You might have noticed that some projectors use different projection technologies. The most common type is LED but there’s DLP, LCOS, and LCD.

LED is the most popular technology because it’s more durable (bulb lifespan is much longer) and it requires less power and generates less heat. LED projectors are usually budget-friendly and designed for casual use.

DLP projectors are used for commercial purposes, mostly in theatres and other venues. The technology is based on using microscopic mirrors to add more pixels to the image thus improving the visual quality. DLP projectors don’t have a very long lifespan but the projection quality is bright and vivid.

There are usually two types of LCD projectors; one chip and three chips (3LCD). With one chip, the light is sent through a colour wheel that contains the three primary colours. 3LCD has 3 individual beams for each colour and no colour wheels. 3LCD is known for its brightness and vivid colours.

Finally, LCOS is a combination of LCD and DLP technologies. It uses light beams, usually with three colours, as well as tilting DLP mirror technology. These projectors can emit significantly more light at higher resolutions than other projectors. The downside is LCOS projectors are very expensive, heavy, and rare.

Why Can’t I Screen Mirror Netflix to the Projector?

The reason you can’t screen mirror Netflix to a projector is that Netflix content is copyrighted and the app blocks content from being sent to external screens. Screen mirroring is limited to non-copyrighted media such as personal pictures. Connecting an HDMI cable or using the USB wired option should bypass Netflix’s copyright restrictions.