Different video devices have different inputs and outputs. While this is always been the case, HDMI has added a new level to this problem. This is because HDMI is not simply another method of connecting video devices it is a complete change in the format. First, it transmits a digital signal. Second, both the resolution dimensions differ from the old systems. As a result, sometimes it is necessary to go from an old composite device to an HDMI monitor, and converting between them requires a converter. So, which composite to HDMI converter is right for you.

Our selection of the best RCA to HDMI converter available in the UK market!

This AV composite to HDMI converter converts from RCA to HDMI but does not convert from HDMI to RCA. It has a USB port for a power source and a switch to go between 720p or 1080p output. This plug and play converter uses advanced signal processing to produce the best colour resolution in detail. It can be used to take RCA signals from a game console, computer, DVD players, cable box or any other audiovisual device that uses RCA cables. In converting from analogue to digital, this device uses a 10 bits maximal 162MSPS sampling. This includes expansion of the black and white level with improved, colour transition and dynamic range expansion with an auto-detection and auto-conversion of the composite signal to 720p or 1080p output. This makes the video come alive in sharpness in the most realistic visuals available.

This RCA to HDMI converter is an excellent way to keep using your old devices on newer high definition TVs and HDMI monitors it is a universal converter to convert from analog composite input to HDMI 1080p output. It produces no lie or distortions in converting from composite to HDMI. The device works right out of the box no drivers needed making it easy to hook up. This plug and play converter has one RCA import for each of the yellow, white, and red connectors. It has an output for a single HDMI connection. This device supports both 720p or 1080p HDMI output. It is an excellent device for both avid retro gamers and VHS collector what devices that lack an HDMI output.

The EASYCEL upgraded version RCA Composite to HDMI converter uses a high-performance IC solution to convert analogue composite input to 1080p HDMI output. This allows your RCA device confused with a 1080p high-definition television or monitor. While it does not convert from HDMI to RCA, it can convert to either HDMI 1080P or 720P output. Its advanced signal processing has high precision in producing colours, resolutions, and details in a plug and play manner. This unit converts from analogue to digital with 10 bits maximal 162MSPS sampling, and black/white level expansion. It has colour transition improvements with dynamic range expansion. It has auto-detection and conversion of the composite signal into 1080p HDMI. It works well with video game systems such as the PS2, Nintendo N64, and Nintendo Wii. It can also be used on TVs, VHS VCR and Cameras, DVD players and can any other video device that uses RCA.

Who needs this converter?

Before anything, check if your device source of the signal has an RCA/AV output. You will want to connect it to your converter, which, by its turn, will convert the analogue signal to be used with your HD monitor or TV equipped with HDMI. The converter cannot be used the other way around. From an HDMI source to an RCA input. 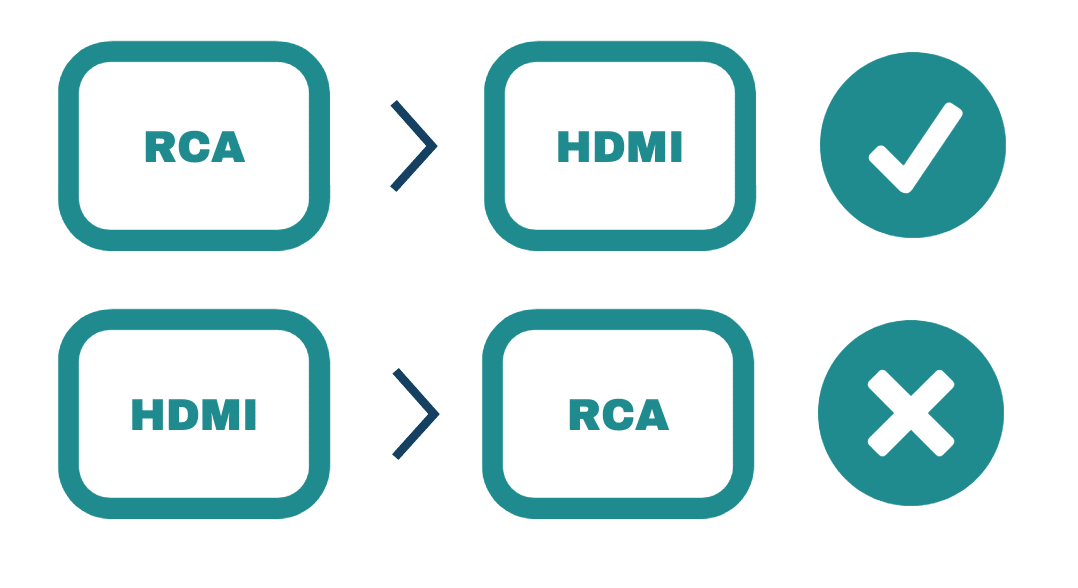 Most converter should work from going from an RCA analogue device to an HDMI digital device, quality can suffer without the proper conversion from the signal. Unless you have an RCA device that has a widescreen format, you should get a converter that will box your image rather than stretching it.

The acronym HDMI stands for “High Definition Multimedia Interface” and it is now a standard connection in the media industry. Introduced in 2003, HDMI has made it possible to go from a computer to a television or other external monitor while maintaining image quality. This digital connection allows the connection of different devices including high-definition televisions, computers, Blu-ray players, video game consoles, and more.

The acronym AV simply means audiovisual and their cables are most often as red, white and yellow connectors although sometimes other colours are used. Each of the cables delivers one of the three primary audio and visual signal elements to the device that transforms them into sound and picture. Two of the connectors transmit sound for stereo, while one of the connectors carries the analogue video signal. The red, white, and yellow connectors are commonly called RCA cables. RCA is an acronym for “Radio Corporation of America” the name of the company that introduced them.

Because AV devices were around more than sixty years before HDMI came on the scene there are lots of devices still in operation that use the RCA connector. As a result, it will sometimes be necessary to connect an RCA device to an HDMI device. Unfortunately, because of the different signal types, this cannot be done with a simple adapter but requires a conversion device to turn one signal into the other. However, AV-to-HDMI converters are usually small inexpensive devices that convert the AV signal into an HDMI signal. They usually do a good job of converting both audio and visual from AV into HDMI.

Finding the best AV-to-HDMI converter is not that hard is that as long as the connections are right most will work for you. However, the most important thing you need to check before buying a converter is whether your TV or monitor already has an RCA connection point. Many high definition television sets have built-in converters so that all you have to do is to plug in your RCA cable. If your TV or monitor only has an HDMI connection then you will need a converter.