If you want your PS5 and Xbox to work within a safe temperature range, you need to understand how the cooling systems are designed. When a console starts to overheat, the performance will be sluggish.

At extreme temperatures, the system will completely shut down, and you’ll be booted from your game. That’s the last thing you want in a competitive game!

In this article, I’ll explain how the thermals of the PS5 and Xbox are designed and the best position for optimal ventilation.

With enough airflow, these next-gen consoles will run smoothly and you’ll be able to game for hours with no issues.

How the PS5 Cooling System Works

The intake fans on the PS5 are located at the top, while the exhaust vent is at the rear, near the bottom. Most of the air is expelled through the rear vent. The PS5 uses a two-fan cooling system.

It’s important to make sure that there’s plenty of clearance behind your PS5 because you don’t want the hot air to circulate. While you can position the PS5 horizontally, the front and back should have at least 4 inches of clearance.

The best placement for your PS5 is vertical with plenty of space in front and behind the console.

Can You Keep Your PS5 in a Cabinet?

You can keep your PS5 in a cabinet if the cabinet does not have a front or back panel. If you put your PS5 in a completely closed cabinet, there will be no way for the hot air to escape.

Without proper ventilation, the PS5 will re-circulate hot air, which will quickly lead to overheating issues. I do not recommend putting your PS5 in a cabinet when you’re playing games with it.

If you feel like starting a DIY project, there’s the possibility of removing the back panel on your cabinet and installing external fans. But most people won’t bother with such a project.

Should You Buy a Cooling Fan for Your Playstation 5?

It’s not necessary to buy an external cooling fan for your PlayStation 5 because the original cooling system is more than adequate.

If your PlayStation 5 is genuinely overheating a message saying your PS5 is too hot will appear. Make sure none of the vents are blocked and the console is getting enough airflow.

The Xbox Series X has one large fan at the top which acts as both an intake and exhaust fan. The fan is so powerful that it pulls air through the entire system via small vents at the bottom and expels it through the top.

It’s very important not to put anything on top of the Xbox Series X!

Can You Keep Your Xbox Series X in a Cabinet?

No. It’s not a good idea to place your Xbox Series X in a cabinet because it needs proper ventilation. The top of the Xbox Series X needs plenty of clearance or it will recycle hot air.

If you place an Xbox Series X vertically in a cabinet, there won’t be enough room for the exhaust fan. The Xbox Series X should be out in the open with nothing blocking the top or bottom of the console.

Should You Buy a Cooling Fan for Your Xbox Series X?

The black grate on the Xbox Series S indicates the location of the exhaust fan.

When placed vertically, the Xbox Series S draws air in from the top and out the side. When horizontal, flat down, the exhaust will be pointing up much like the Xbox Series X.

There are three intake vents on the Xbox Series S, two on either side and at the bottom. The vents are designed in a way for sufficient airflow regardless of the placement you choose.

Can You Keep Your Xbox Series S in a Cabinet?

While the Xbox Series S is small, it’s not a good idea to keep it in an enclosed cabinet. The exhaust fan can generate a significant amount of heat when under a heavy load.

Should You Buy a Cooling Fan for Your Xbox Series S?

No. It’s normal for your Xbox Series S to get hot when you’re gaming with it. The cooling system is more than capable. External fans will likely create more issues than they attempt to fix.

Regardless of which console you choose, the PS5 or the Xbox, you need to make sure that there is plenty of clearance around the vents. The PS5’s exhaust vent is at the back of the console while the Xbox Series X’s is at the top.

The exhaust vents are the most important and you should make sure they have plenty of room.

Do not place any console in a cabinet unless the cabinet has no back panel and external fans to keep fresh air circulating inside.

While you can modify a cabinet to suit a console, it requires removing the back panel and adding fans, which can be a large project.

As for adding external fans to your consoles, it’s generally not a good idea, and most external fans won’t make a noticeable difference.

To keep it simple, I would place either console vertically next to your TV, the way they’re meant to be placed.

Photo by Charles Sims on Unsplash 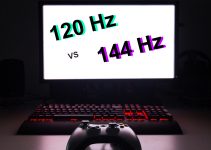