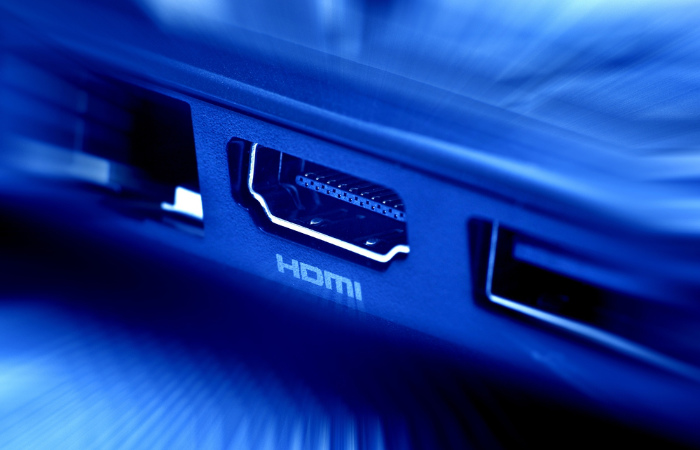 So you noticed that your laptop has an HDMI port, and since HDMI is backwards compatible, wouldn’t it be possible to use your laptop as a display for another device?

For example, maybe you want to use your laptop’s screen for playing games on a console or as an external monitor for your PC. I think we can all agree that having a laptop with HDMI input would be really handy – it’s essentially a portable display!

Unfortunately, the reality is that it’s not possible to get HDMI input on a laptop unless it has a separate HDMI port labelled “HDMI-in”, and that’s very rare.

There are many reasons why this isn’t possible, but the main reason is that the incoming signals from HDMI need to be decoded, a process that requires specific hardware not usually found in laptops at the moment.

On top of that, laptop’s screens are usually LCD panels that use a different voltage than regular monitors, called Low-Voltage Differential Signalling (LVDS) and the connectors are different too.

While HDMI connectors are the same, the signals won’t transfer, so you can plug one end of an HDMI cable into your Xbox and the other into your laptop but your laptop won’t receive any signals.

Are There Any Gaming Laptops that Have HDMI-in?

There are a handful of laptops that do have an extra HDMI port for HDMI input, such as; Alienware M17x, M18x, R4, and 18. It doesn’t look like any other laptops support HDMI in at the moment, but I’ll update this article when I found some.

Note: When a laptop is using HDMI in, it will only be a display, none of the other components (speakers, keyboard, etc) will work. Nevertheless, it can be really nice to use your laptop as a portable display because you can use it to play games on your Xbox or PS4.

How to Get a Laptop to Read HDMI-in:

Having said that, there are some possible solutions to getting a laptop to, at least, read HDMI-in signals, which I’ll talk about in the next section.

Why would you want to do this? One reason would be because you want to use certain software (OBS) on your laptop to record or stream content from another device, such as an Xbox. To do this you would need to buy a USB HDMI game capture card, something like this product:

View prices on Amazon UK
While a USB HDMI game capture card won’t allow you to play games on your laptop (there’s a bit too much latency) you can use it to stream or record gameplay.

The problem is these cards can be a bit expensive. Most people agree buying a cheap HDMI monitor would be more practical than buying a USB HDMI game capture card.

Can You Use a Laptop as an External Screen?

With HDMI, it’s not possible to use a laptop as a second screen (unless it supports HDMI-in) but there are a couple of interesting hacks you can consider. On Windows 10, there are a number of ways to connect two devices to use them as external displays through a Wi-fi network.

The easiest way would be to use Windows 10’s Miracast support function. If both your laptop and PC are connected to the same Wi-fi network, then you can probably connect and use either of them as a wireless display.

To do that, open the Windows 10 Display Settings (search in the taskbar) and click on Projecting to this PC. If the feature is supported, you’ll be able to choose “Always On” from the drop-down menu. You’ll need to enable this setting on both your PC and laptop.

Tap the Windows + P keys to open the projection menu, then click on “Connect to a Wireless Display” and it should find your laptop. From there, your laptop will act as a second monitor, and you can configure all the usual display settings (resolution, orientation, etc).

The other method would be to use third-party programs, such as SpaceDesk. These programs will require a Wi-fi network, though. Those are just a couple of ways to use a laptop as a second display without HDMI cables.

It’s also possible to completely remove the screen on your laptop and use it as a portable screen with a controller board. Naturally, I don’t recommend this method because it’s complicated, but it can be helpful when looking to salvage an LCD panel from a broken laptop.

Bear in mind, these aren’t adapters, more like multiple components wired together, and a power source is needed too. It’s not a very elegant solution.

Several DIY enthusiasts use this method to build custom PCs, but it’s definitely not something to try if you have no experience with electronics. I would only recommend this if you have a laptop lying around that’s beyond repair.

Can You Convert HDMI Output to Input?

No, you can’t convert HDMI input to output. The internal circuitry is too different. The only alternative would be to get one of the game capture devices mentioned earlier which will allow you to receive signals.

What is the Difference Between HDMI Input and Output

The difference between HDMI input and output is which direction the signals are coming from. If they’re being sent from a device, then that port is HDMI-out, and the receiving side is HDMI-in.

Most devices have HDMI out ports, which means they can send signals out, but not receive any. Likewise, most displays have HDMI-in ports (monitors, TVs) that can only receive signals. There are some rare products, such as the Alienware laptops mentioned earlier that support both HDMI in and out, but that’s not the standard.

How Can I Tell if My Laptop is HDMI in or out?

Generally, an HDMI-in port will be labelled as such. If your HDMI port is not labelled, then it’s a regular HDMI port and it’s only HDMI-out. There are devices that have both, but not on the same port, they have two separate ports, one for HDMI-out and one for HDMI-in.

Can You Connect an Xbox to a Laptop with HDMI?

Since these are HDMI-out devices (unless otherwise specified), no signals would be transferred, and there’s a risk you might damage some internal circuitry.

Game capture cards might work, but they usually have a lot of lag so you’ll notice some input delay, much more than what most people can tolerate.

These are mainly used for recording or streaming console games, I wouldn’t recommend them for actual gameplay. In short, you can’t connect a gaming console to a laptop through HDMI.

4 thoughts on “How to Get HDMI Input on a Laptop”