Connecting a laptop to a projector with HDMI is easiest when both devices have HDMI ports. In this scenario, there’s no need for adapters, you can simply run an HDMI cable between both devices, a male to male HDMI cable.

In most cases, both the projector and laptop should automatically detect the new connection, but you may need to change the source settings on the projector. The main downside to this setup is that, if your projector is outside, you’ll need to find a place for your laptop. Don’t forget about all the necessary power cables too!

when not connected to a power source, some laptops will automatically enter battery saving mode. In that mode, laptops can disconnect external displays to save energy, so it’s a good idea to keep the laptop plugged in when connected to a projector. We recommend running a power strip for all your devices.

Scenario 2: Only One Device has HDMI

When only one of the devices, either the laptop or projector, has an HDMI port, things can get a little tricky. However, there are a few solutions you can consider, all of which require a specific adapter.

The type of adapter you need depends on the type of ports your devices have, we’ll run through the most common ones. To start, check your laptop and projector for ports, to see if any of them match. If they both have VGA or another port, then you can connect them with a simple cable.

Note: most laptops have at least one HDMI port and one other port, such as VGA. However, if none of the ports matches, then we need to look for adapters. 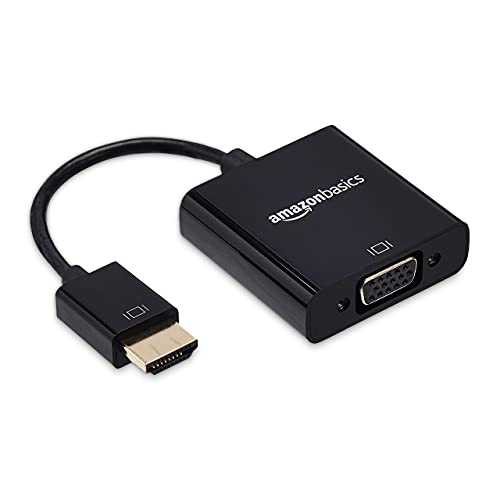 If one of your devices has VGA and the other has HDMI, then what you need is a VGA to HDMI adapter. Be careful, not every adapter will work. What you need is an adapter with external power, usually via micro USB.

The USB cable can be plugged into either the laptop or the projector. The reason for the external power is because VGA uses analogue signals, while HDMI uses digital, so an active conversion needs to take place.

We recommend getting an adapter that has audio ports and running it between the laptop and projector or laptop to external speakers. VGA can’t carry audio signals.

Most projectors have at least one HDMI port, but maybe your laptop only has USB-C ports (as tends to be the case with recent models). The solution here would be to get a USB-C to HDMI hub or adapter and then connect the hub to the projector with an HDMI cable. No need for converters, USB-C can carry audio and video. Using a USB-C to HDMI adapter is also the same solution for connecting a Mac to a projector (and some phones!).

Micro (and Mini) HDMI to HDMI

There are some laptops, specifically Chromebooks, that only use Mini-HDMI ports. To connect one of these laptops to a projector you simply need a Mini (or Micro) HDMI to HDMI adapter or cable. The cables can work well. To figure out what type of HDMI port your laptop has, I recommend checking the official manual or Google the model number. These two ports look quite similar, so it’s easy to make a mistake.

While rarer, there are some laptops with DVI ports. If one of your devices has DVI and the other has HDMI, connecting them via an adapter is simple. DVI uses digital signals too (same as HDMI) so no conversion needs to occur, which means any DVI to HDMI adapter will do the trick, no external power is needed.

In most cases, a simple adapter will do the trick. In the case of VGA, you’ll need an adapter with external power, but the other connectors shouldn’t require external power because they all use digital signals.

Bear in mind, each adapter and port has bandwidth and resolution limitations, but for media watching at 1080p, they all should work fine. VGA will be the lowest, although some hubs will attempt to automatically “upscale” the resolution to 1080p. With VGA to VGA, there shouldn’t be any problems.

How to Use a Projector with a Mac?

As you might have noticed, Macs are slowly phasing out HDMI ports, in favour of USB-C ports. To connect a projector to a Mac you will need either a USB-C to HDMI adapter or a USB-C hub that has an HDMI port.

There are plenty of hubs on the market, and most third-party ones work the same as official hubs. These hubs can add a wide selection of new ports, such as SD-Card slots, USB ports, HDMI, VGA, and many others.

You might need to enter your System Preferences and tap Detect Displays to synchronize your Mac with the projector.

Simply plug the Chromecast into the projector and use your phone or laptop to connect and configure the device, as per the instructions included in the package. The benefit of using a Chromecast with a projector is you can control the media and “Beam” content to it from almost any device; phones, tablets, laptops, and others.

Basically, using a Chromecast (or another casting dongle) with a projector eliminates the need for cables and connections. Personally, I prefer this method over the others, but it’s still useful to have the other adapters. You could also use a Chromecast to mirror your phone’s screen.

So that summarizes our tutorial on how to connect a laptop to a projector with HDMI. In most cases, everything should work with no problems, but you might have to tinker around with device settings and connections.